A recent Wall Street Journal book-review, When the Earth Had Two Moons, by Erik Asphaug, starts with,

“If you visited the surface of the Earth 4.5 billion years ago, you wouldn’t recognize it. The newly formed planet was still cooling from its recent coagulation. There was a hot rocky surface (probably; we don’t know for sure), volcanoes (again, probably) and a steamy atmosphere (maybe). It seems unlikely that even the smallest thing resembling life was yet present, though, really, we don’t know. … We can be forgiven for not knowing what the surface of the Earth was like before this moment, as nothing survived that day intact.”

The reviewer’s thoughts are remarkable because 1) there is a frank admission of uncertainty and 2) there is a profound recognition that our planet is always changing.

This WSJ book-review affirms my argument that the anthropogenic global warming (AGW) crowd and the tax and spend proposals we see cascading through various legislatures have put too much weight into stasis. The environmental balance that we witness today will not be the balance of tomorrow. The T. Rex and Mastodon are proof of that. It is one thing to recognize that the barred owl is a more successful survivor than the spotted owl but does this warrant shot-gunning the former to preserve the latter? This policy is not rational or scientific, it is a moral argument that demands an appropriate moral response.

Scientists have extensive knowledge of the Earth’s most recent 4,000-year period of glacial expansion and retreat. Historical references to the Little Ice Age and the Medieval Warming Period, are quite robust. Documentation particularly notes the improvement in mortality rates, farming, horticulture, livestock management, population growth and cultural achievements across most known cultures during the warmer periods of human history.

If this is a fact, then why the political clamor? Why does the public at large expect the state, or federal government, to control or dictate the best type of energy that should be available? All our choices – nuclear, ethanol, diesel, low-octane rotaries, natural gas, fuel oil, solar, wind – all have drawbacks and benefits. Why not let the market decide?

Government mandates are blunt force instruments that shrewdly coerce compliance through costly fines, penalties, and taxes without having the bandwidth to assess alternative technologies and innovative approaches that might solve our problems. Unlike the private sector, the government is not an ingenious inventor. Economic data suggests that the government is too costly, too inefficient and bureaucratic while being prone to corruption, misdirection, and fraud.

The results are seen on the street rarely match the political hype. Missed targets and cost overruns abound while with every election cycle the public gets promised newer, bigger, grander and longer-term, yet, more costly and unsustainable programs.

I would prefer an approach that more closely resembles the paradox witnessed throughout world history. A situation where free people enjoy the rewards of their hard work and where disseminated freedom leads to increased human well-being, societal growth, and creative problem-solving. Free people are creative people.

The proposed legislation will grow the state, empower the political elites, raise taxes and redistribute the wealth of the most productive without even slightly impacting worldwide carbon emissions.

If you think I’m out on a limb, look at this map with regard to existing, planned and currently under construction, coal-fired electrical production facilities and ask yourself, “Given the world’s population demographics, will taxing Oregon families and businesses impact the behavior of the heaviest carbon polluters?” Can Oregon’s population make up for emissions from expansive fires in California, Russia, or Australia, or, volcanic activity throughout the world? 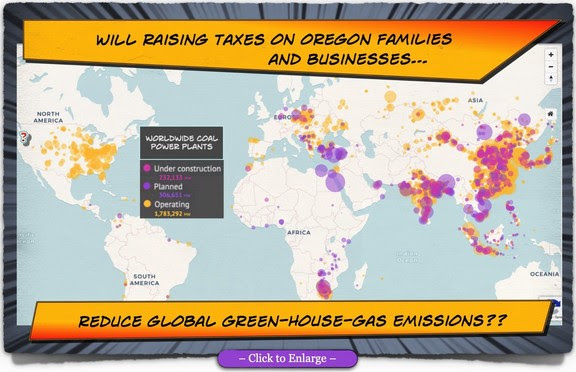 The Democrat super majority should have asked this same question when they outlawed plastic straws and single-use plastic bags, “will it make a difference or is it just a costly hassle?”

People and their personal choices can make big differences. Personal responsibility and stewardship are the appropriate tools for each of us to use in our personal and public lives. I’m not making the claim that everything is peachy, and people aren’t wasteful or thoughtless when it comes to environmental concerns. Instead, I’m making the claim that government mandates never represent a balanced, efficient or rational choice due to the conflicting interests that guide public policy.

For example, I can remember when paper bags were outlawed to “save the trees.” The legislated solution was a floppy, thin, shapeless, “single-use” bag that never had any groceries in it by the time you got home because they were strewn about the car.

These constantly changing perspectives on right, wrong and which bag is the correct bag, shows that government policy can be irrational. Politicians make decisions based on limited knowledge with biased information. Paper bags were banned because legislators believed the environmentalist rhetoric about diminishing forests. Now there is a new emergency because people have been so diligent in following the law and not using paper.

Yet, the real solution would have been to allow free choice in the marketplace. Some folks would have used paper, others plastic, some would tend toward variations on recycled products while clever stewards would have developed the inexpensive reusable bag two decades sooner. Was it helpful to force people to use nothing but plastic only to berate them and force a nickel charge for buying the next version of the correct bag?

Yet, reality does not appear to inform the supermajority. Free market solutions are lost to AGW fanaticism, as though state power is the only goal. Thus, we see the ‘politicizing’ in all areas of our lives and society. Success hinges on being able to implement all-encompassing and ever-more complex social experiments where results become difficult to recognize and evaluate.

Additionally, the true societal costs are never properly accounted for as profound economic and community distortions, dislocations, and malinvestments pile onto the balance sheets of families and businesses.

The Climate Policy office holders will not be the people’s representatives as they will be appointed by the Governor and represent the statists’ interests, instead. They will have near-universal control over Oregon businesses through rulemaking, unlimited taxing authority, penalty assessments, discretionary enforcement and other extensive economic burdens that will never make headlines. Oregonians know better, as we’ve seen unfettered giveaways and compliance incentives before, like the $1.2 billion Business Energy Tax Credit (BETC) scandal.

The supermajority continually reaches for near-tyrannical mandates that are wasteful and extremely expensive to Oregonians without ever accomplishing any measurable goals. Therefore, I will do everything in my power to stop any HB2020 look-alike which will subvert our individual liberty and bankrupt businesses, whether small or large, in the metro area, or in the rural heartland of Oregon.

Remember, if we don’t stand for rural Oregon values and common-sense, no one will!